10 Lessons From Running My First Half Marathon

I did it! I ran 13.1 miles without stopping or walking.

A little over a month ago, I decided to run my first half marathon with just 34 days of training.  After completing 380 straight days of exercise earlier in the year and rebounding from nerve issues in my foot, I was looking for a new challenge.

When I signed up for the Sunset Beach Half Marathon, I was picturing a sunny late May run over the bridge and around the island.  Instead, we had 20 mph wind and heavy rains that caused flooded streets across the Sunset Beach Island. Definitely a challenge.

Through training and running my first half marathon in crazy weather conditions, I learned a lot.   While they are still fresh, I figured I share my top 10 lessons learned here for those of you thinking about running your first half marathon.

#1. Training for a half marathon in 34 days is possible.

My goal was to run the entire 13.1 miles without stopping or walking. I successfully accomplished this goal with a time of 2 hours and 28 minutes. Not a great time, but with a compressed training schedule at age 43, I’ll take it!

How in shape was I before I started my 34 days of training? The I decided to signup for the half marathon, I struggled through a 5K at a 9:45/mile pace due to not running for months because of toe pain caused by Morton’s Neuroma. I had been lifting for the last couple of years but had gotten out of cardio shape because of the foot injury. Only once in my life had I ever even ran 6 miles.

I ended up missing 1 week of training due to catching Norovirus on a work trip to New Orleans.  So, I actually ended up proving that it is possible to train for a half marathon in 27 days.

My goal was to run the entire 13.1 miles without stopping or walking. I successfully accomplished this goal with a time of 2 hours and 28 minutes. Not a great time, but for only training a month at age 43, I’ll take it!

One of the keys of the #Overcome38 Challenge is the day 1 post where challengers announce on Facebook or Instagram that they are going to exercise for 38 straight days and checkin daily for accountability.  Publicly telling the world your goal and sharing the journey is powerful.

I used the momentum of running a 5K with little training, to convince myself that I could run a half marathon in just 34 days. I then quickly signed up for the Sunset Beach half marathon when I got home from the 5K. Then I went to Facebook to share my plan & goal for accountability.

Sharing the goal and the ups and downs (missing a week of training with norovirus) kept pushing me to make sure I accomplished this goal. The best part of sharing the journey with Facebook posts is that my running friends were able to give me awesome advice in the comments. If I did this on my own privately, I would have missed out on these tips and probably would not have ran the entire 13.1 miles.

I see this work on other goals outside of fitness. I have friends who share their journies to be a better artist, actors, poker players, etc. They share their goals and the process of making them happen.

#3. Long Distance Running is You vs You.

Jesse Itzler regularly says it’s You vs You which applied in a couple of ways during my first half marathon.

Almost everyone out there is trying to get their best result possible based on their training and current conditioning. They are not racing anyone but themselves and everyone running the race is in a different place in their fitness journey. My goal was just to run the entire 13.1 miles. If I tried to keep up with runners who have been training longer, I would not have met this goal.

When you have runners who are much older or younger passing you, it is tough to not let competitiveness get the best of you.

Controlling what was going on between my ears is how I was able to successfully to accomplish my goal. When the race started at 7 AM, it started pouring. As we hit the top of the peak of the Sunset Beach Bridge, it felt like it was hailing with 20 mph winds. It was so bad that runners were laughing out loud at the conditions in disbelief. But I put my head down and just kept putting one foot in front of the other. I was not going to let the weather keep from accomplishing this goal.

As I approached mile 11, it hit me that my training was not really adequate since I had only run 3 long runs of 6, 8 and 9 miles leading up to the race. Prior to the half marathon, these were my longest runs ever.  But, I had to run the whole way to accomplish my goal and played all kind of mental games with self to get it done.

#4. I can run without music and actually enjoy it

Thanks to the rain, at mile 5 my music stopped playing due to too much moisture getting into my phone. I always running listening to music or audiobooks. I had my entire playlist planned out for this race. When I took out my earbuds, the sound of the pouring rain on my hat and road was annoying, so put the earbuds back in to drown it out.

After mile 7, the rain slowed and I took out the earbuds. I talked to some fellow runners and actually found that I enjoyed being more in the moment by not having music.

One of the biggest benefits of running is that it helps clear your mind.  I’m going to try to run more often without the earbuds in to focus more on my thoughts.

#5. I can run without a running tracker and keep the correct pace

My Nike Run Club tracker told me I was running a 9-minute mile pace and that I had just completed 5 miles. I thought to myself “Wow, I must have trained better than I thought because I feel great for a 9 minute per mile pace”.  2 Minutes later, I pass the Mile 4 marker. My run tracker was was off. Then at mile 5, my phone stopped working.

I ended up running close to my training pace the whole way without the app.

#6. Experiences are better with Family & Friends

My Dad and stepson came down to run the 5K and support me as ran my first half marathon. The half marathon started 20 minutes earlier than the 5k. As the clouds darkened and it started to pour down rain, I felt so bad that they were out there to support me in such horrible conditions. 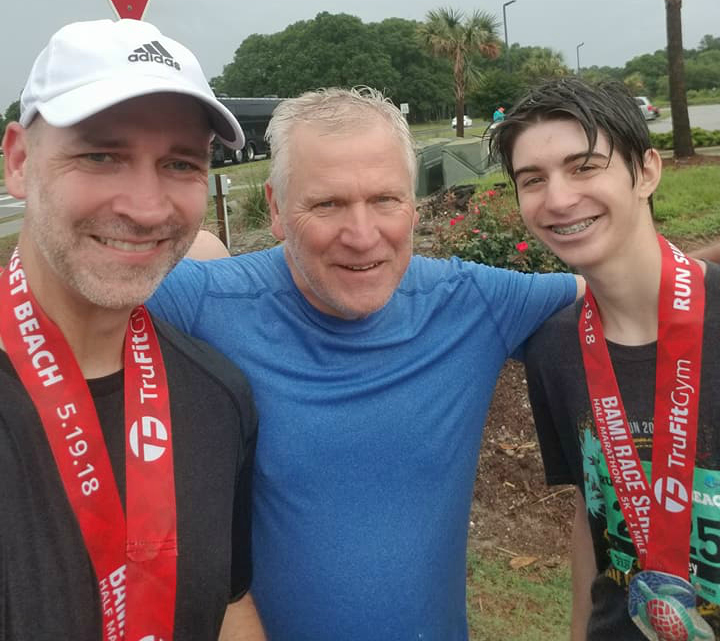 But as I passed the 13-mile marker, and saw my dad there to cheer me on the last few hundred yards I started to tear up. At that point, I found some extra energy and sprinted all the way through the finish.

It was Dylan’s first 5K and he ran the whole way. It’ll be a day that we’ll all remember for a long time to come.

I already had the new Thorlo Experia Prolite socks which have extra padding that helps my toes not hurt.  They are made out of high-tech lightweight fabrics that prevent blisters and other common feet related issues.

On race day, I put Body Glide on each toe and on my feet as well as other places that may chafe. Body glide is so mess-free that I could barely even tell I put it on. During the race, many of the streets on the island were flooded. We had no choice but to run through the deep puddles.  After 13.1 miles of running with wet fet, I did not have a single blister or foot related issues.

#8. Run/Walk is an interesting race strategy that I have to try

My main goal was to run the entire 13.1 miles. So many of the runners were incorporating different run/walk strategies. The would run past me and then a few minutes laters start walking.  I would pass them as I continued running.  A few minutes later they would pass me. As we got toward the end of the race, I did not catch a lot of them.

It was tempting to join the run/walkers. They seem to have it figured out. But, my goal was to run the whole way, so I did.

In the fall, my current plan is to do two half marathons (new challenge). I will run/walk one and run the other one within a few weeks of each other to see which one I get a better time on. As a digital marketer, I’m wired for a/b testing. This will be my fitness a/b test.

It looks like Coastal Race Productions put on 4 half marathons each year at North Carolina Beaches. They did a great job communicating with runners leading up to the event with the likelihood of bad weather.  The volunteers and staff did an incredible job in the pouring rain. After the race, they had free food, beer, snowcones, and music. And the Big Ass Medals lived up to their name! 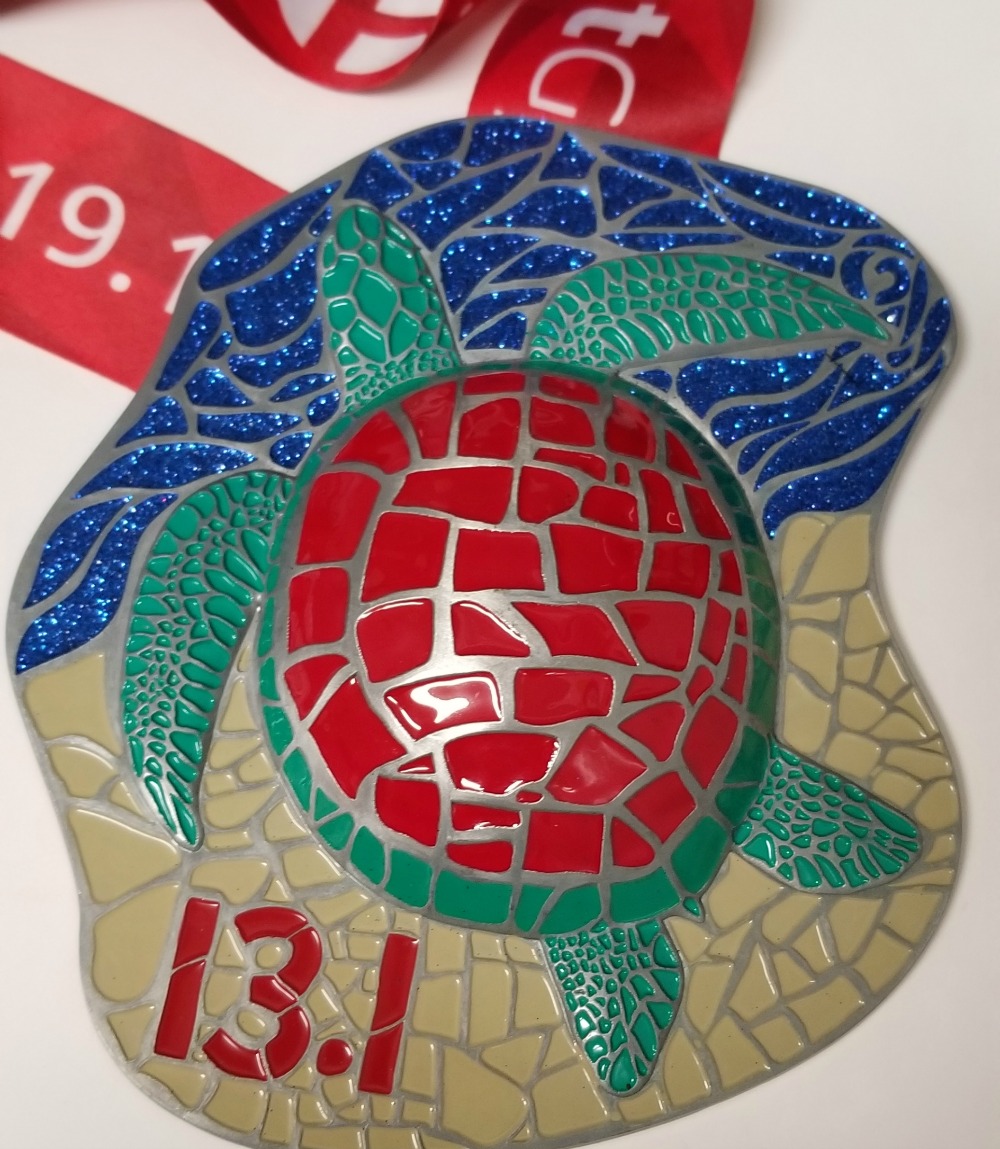 Since all the Coastal Half-Marathons are by the beach, the courses are pretty flat giving you a good shot at hitting your personal best! I totally recommend running one.

The 2018 Boston Marathon happened right at the start of my 34 days half marathon training. I watched in amazement as the runners persevered in the pouring rain and 37-degree temperatures. But, the Boston Marathoners are the world’s most elite runners and they train for months for this event. So, I’d kind of expect that level of dedication. 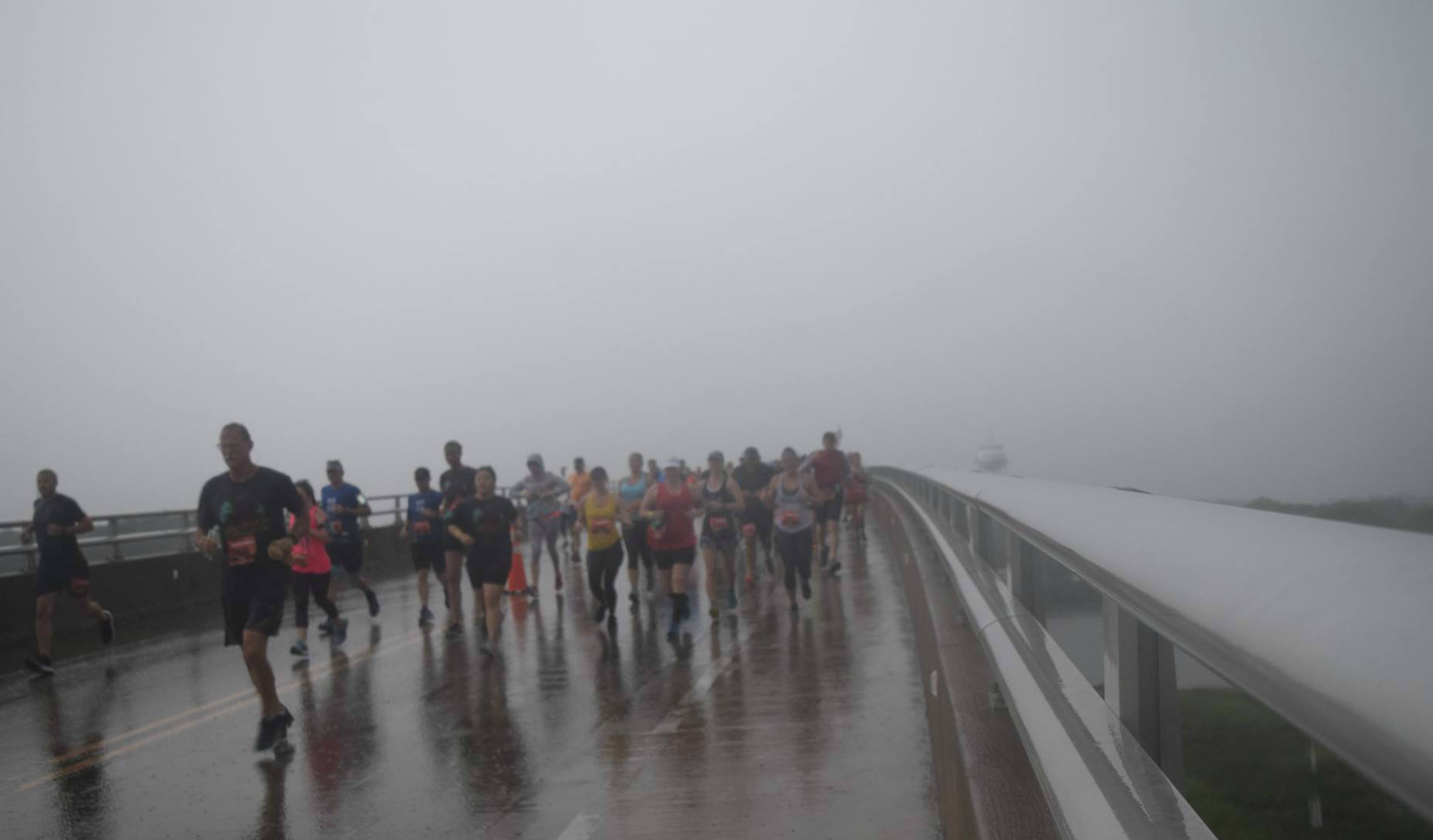 Downpour on Bridge during the Half Marathon

The Sunset Beach Half Marathoners proved to be no different.  They were made up of all ages, sexes, shapes, and fitness levels.  While the temps were not as cold as the Boston Marathon.  The rain and winds were just as bad, but I did not hear a single complaint from another runner about the weather. I laughed out loud when we were met at the top of the Sunset Beach bridge by 20 mph winds and rain that felt like hail. Other runners around me laughed too. But, no one complained.

There were no excuses. Everyone just put their head down and kept running. Runners are bad asses.