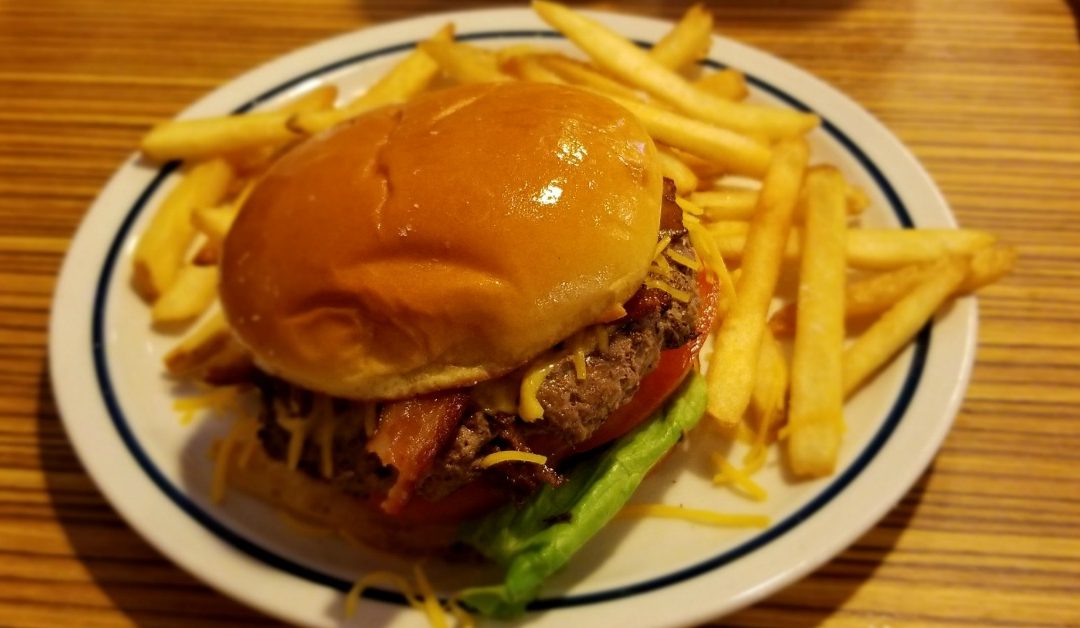 As a long time social media marketer, I get excited when organizations take risks and do something different with the social platforms. Since last Friday, I’ve been following the International House of Pancake’s #IHOb campaign closely because it has generated so much online buzz.

Last week, IHOP switched their Twitter Account from @IHOP to @IHob and even went as far as changing the signage on at least one IHOP restaurant to reflect the new IHob brand.

This announced change last week had the internet “outraged” and media sites like TheStreet.com asking “IHOP Is Changing Its Name After 60 Years to IHOb. Huh?”

The big reveal was made today that the mysterious ‘rebranding’ flipping the p to a b was because their new burgers are so good they will now be known as the International House of Burgers.

Will they really switch their name to IHob or is this 100% a PR/Marketing Stunt? Nope, it is a PR stunt that I believe has actually gained more traction online than even IHOP imagined that it would.

After the big reveal this morning, 3 of the top 11 trending topics on Twitter were related to the IHOP #Ihob campaign. 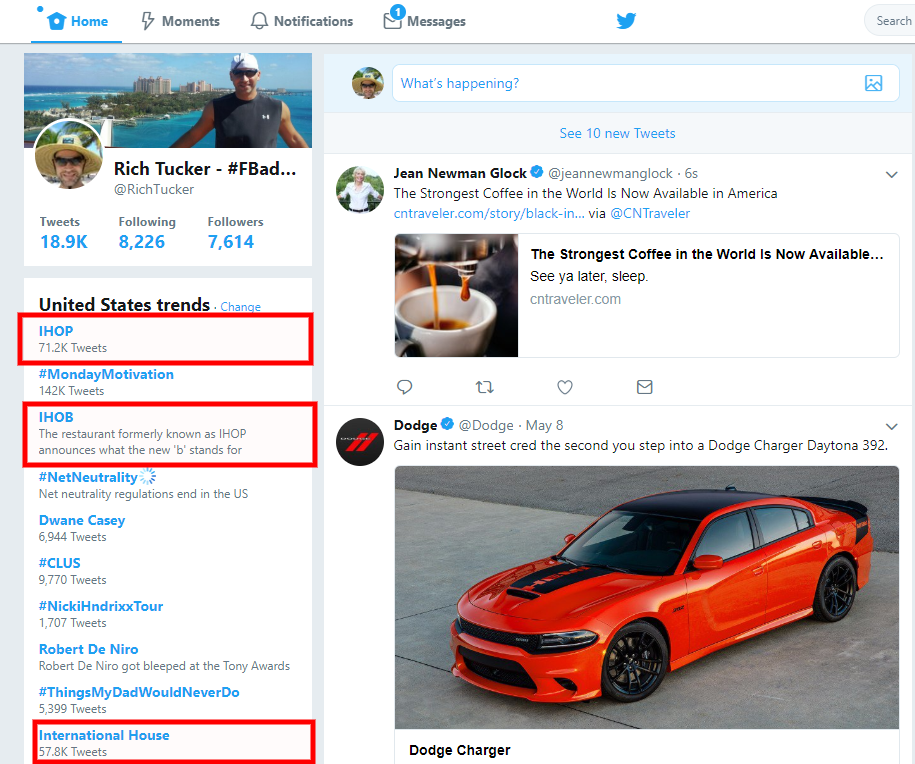 Almost every major media outlet covered this big reveal today… but I could not find a single reporter who actually went to an IHOP and tried a burger.  Doing my civic duty as a social media marketer, I took it upon myself to research the in-store execution of this campaign, AKA go eat a burger!

Of course, I live tweeted the experience:

I was expecting the IHOP to be fairly busy with all this online buzz.  This was not the case. At 12:50 PM, there were only a few tables set.

IHOP did have some posters in the Windows with the IHob logo, new Burger Menus, and a couple of the staff had on #IHOB 6.11.18 Burger T-shirts.

When I sit down, my waitress pointed out the burger menu and when I said “oh yeah, I’m here for a burger”, she gave me a big smile (I may have been the first person who came in specifically for a burger today)

I had a hard time choosing between the Brunch Burger and the Classic Cheeseburger with Bacon.  I let the 300 fewer calories in the Classic with Bacon finalize the decision for me. I swapped the American Cheese for Cheddar. The Classic with Bacon is currently priced at $8.99 which included unlimited fries and soda. (my guess is this price varies nationwide)

The burger was delivered to me after a very short wait.

I’m not a food critic or a food blogger… but I do love a good burger.

After applying some ketchup and mayo, I took my first bite.  I have to say IHOP came pretty close to nailing the perfect mix of meat, grease, and toppings. The glistening bun was a nice compliment to the burger.

But the real discussion here should not be whether not the fake rebranding was a good idea or bad idea, it should be about whether the toppings go above or below the burger.  IHOP, just like their sister brand Applebees has opted to put the Tomato, Onion, and Lettuce below the burger!

I’m typically a topping above the burger type of person, but it all played well together and I give the IHob Burger an A-. And for $8.99 with unlimited fries & soda, the IHob Burger is a really good value.

I believe the #IHob media traction and online outraged from a potential name change that followed actually caught IHOP by surprise. . 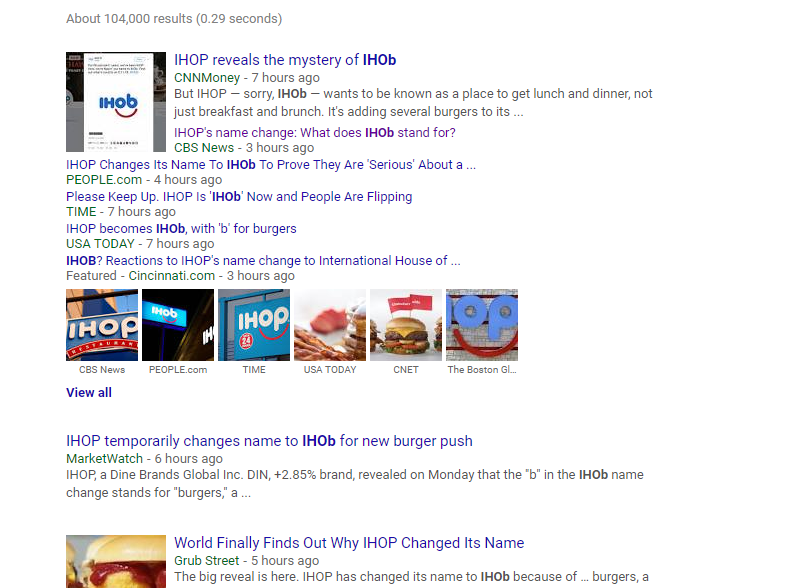 For the store that I visited, this did not result in much additional foot traffic on Day 1. The staff was excited about the new burgers and the in-store marketing matched everything online. I felt like they had a well executed integrated online/offline strategy. Many retail stores and restaurant fail at integrating online promotion and in-store execution.

Today, their Social Media Engagement could have been better.

I do feel that they dropped the ball on not interacting with a single tweet I made as I live-tweeted my experience. I know there were lots of tweets. I did see them responding to some customers using the #IHOB hashtag. But with how well everything else was executed, I’d expect them to have a command center of social media specialists responding to customers sharing their experience #IHOB experience today.

When I retweeted A&W Restaurants who got into the #IHob trending conversation, they immediately liked my tweet. 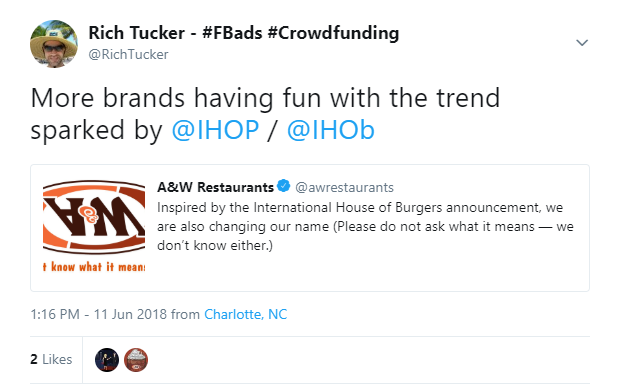 If I was IHOP, I would have tried to interact with EVERY person tweeting today from a restaurant using the #IHob hashtag. Especially considering that there may have a been some people upset by the fake name change. Retweeting and responding to as many positive customer experiences as possible would have helped.

Was the #IHob Campaign a success? They successfully sliced through all the noise on social media and dominated online for a couple of days. The burgers are actually good and their employees appeared to be excited about them.  Calling it a true success will depend on if it drives an incremental increase in sales. We’ll check back in a few weeks to see if this actually helped sparked sales which had been slipping.

Thanks to John at the Woodlawn Rd IHOP for taking a photo with me so I could capture the Commemorative #IHob 6.11.18 T-Shirt 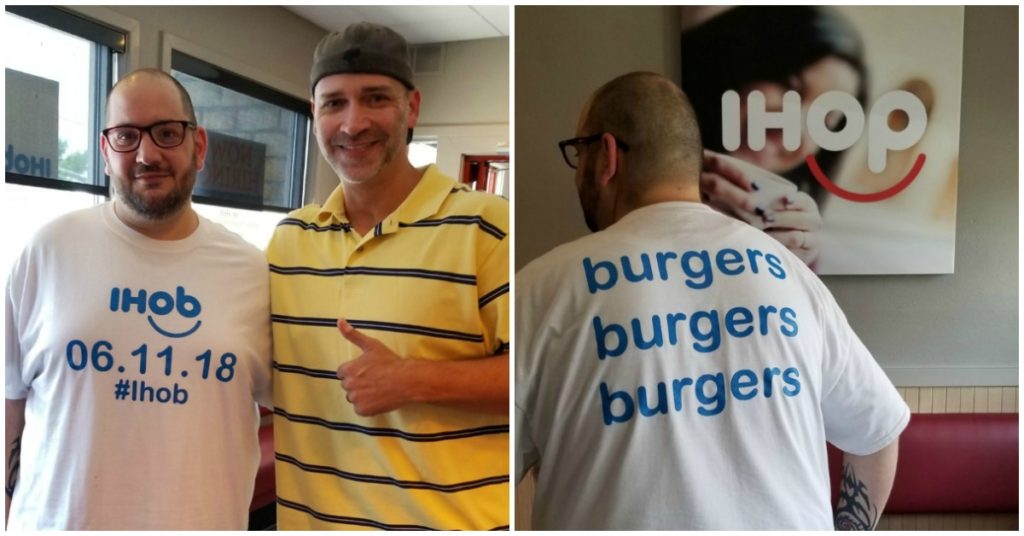